Still in a very festive mood, I decided to knit up a Santa hat with some left over wool.  I'm pretty pleased with out it turned out, though if I had more yarn I might have made it a bit longer. 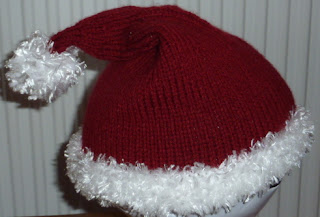 Santa Hat
5mm circular knitting needles, 32cm long
set of 5mm DPN's
darning needle
acrylic yarn and eyelash yarn.  I'm not sure of the quantities, I probably had 60g of red and not much of the white!

With the 5mm circular needle and one strand white held with one strand of white eyelash, CO 90 stitches.  Join in the round, taking care not to twist the stitches.  Add a stitch marker to mark end of row.

K1 round
P1 round
Repeat these two rounds until you have 8 completed rounds.

Change to red yarn.
K every round until piece measures 4" from the start.  Start decreases

Continue knitting 2 together until you get 1 stitch.  Break thread and run through last stitch.  Tie off.

Make a pom-pom with the white yarn and white eyelash.  Fasten to end of hat.

As usual I agonized over what to get my girls nursery teachers for Christmas.  Some people say give a teacher a small something, others say not to bother, as they are just doing their job.  Well it is a job I couldn't or wouldn't want to do, so I like to show my appreciation,  Here is what the girls (age 4) and I came up with.

First we bought 4 plain plastic food containers.  Then after a trip to Poundstretcher (like a Dollar Store) I came away with some plastic bow ornaments (.99p for two) and some gift tags (.99p for 30).  With the help of my hot glue gun I glued a ribbon ornament onto each box. 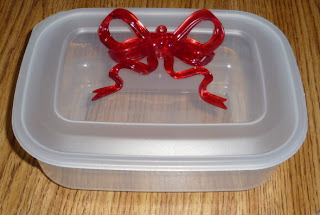 Then we made up a list of baked goods to fill the boxes with, and set about making them.

First was peppermint bark (though I think I'll change the name to peppermint rounds).  I melted a 200g bar of dark chocolate and put a heaping teaspoon into each cup in a mini-cupcake tray (silicone is a must or they won't pop out, but you can use mini cupcake papers as well).  Then we let it cool until it was hard.  You can put it in the freezer if you want.  Next I melted a 200g bar of white chocolate with a bit of canola oil (keeps it from clumping) and the girls filled the cups this time.

While I was melting chocolate Isla and Rori had a great time smashing a couple of candy canes to bits.  I recommend a ziplock and rolling pin, however it was still messy.  Then they sprinkled the crushed up candy on top of the melted white chocolate.  We let them cool until they were hard, then popped them out and viola!  Some will go into the tupperware, and the rest are going to be bundled up in plastic wrap for the other staff at the nursery. 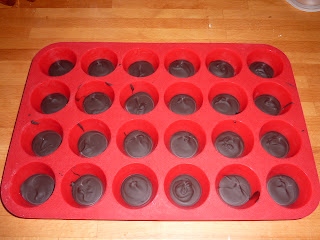 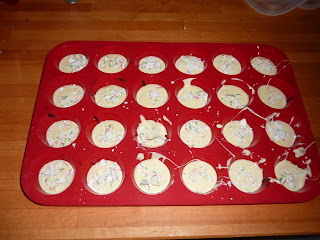 I know, they look messy, right?  But they pop out clean and lovely.  We also made a few in mini-cupcake papers. 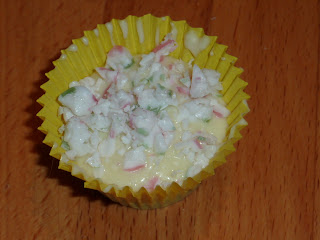 After that it was time to make fudge.  Using a recipe I found online I combined 765g of chocolate.  I used 200g milk chocolate and the rest dark chocolate.  To that I added 55g butter and 14oz condensed milk.  I melted everything on the stove and then poured into an 8x8 in pan.  I sprayed the pan with oil, then I lined it with foil and sprayed the foil with oil.  Then I put it in the fridge and crossed my fingers.  I've never made fudge before...... 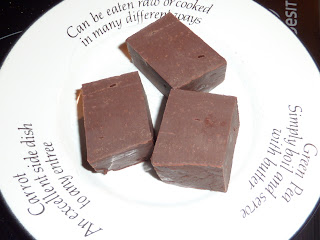 While we were on a roll, we made candy cane reindeer.  A couple of pipe cleaners, some beads, pom-poms, a hot glue gun, and a lot of fun! 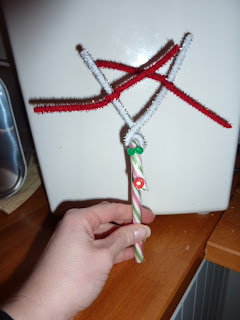 The gift boxes are for each of my girls teachers, but I also wanted to make the rest of the staff (there are 10 in total) a little something too.  So we took three of the chocolate peppermints, and wrapped them up in cling wrap, and tied them with a ribbon.  Then we added the reindeer and a gift tag.  I think they are nice, unique, edible, and made by the girls! 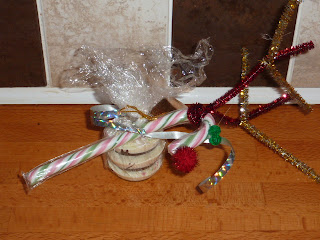 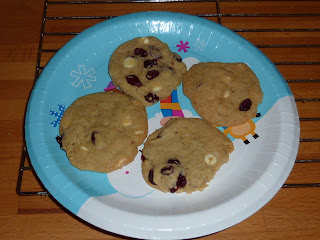 I used this recipe White-Chocolate-Macadamia-Cranberry-Dreams
minus the macadamia nuts. 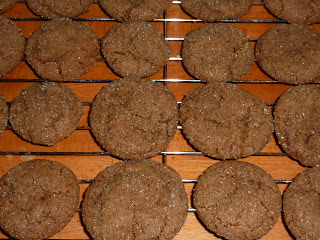 And this recipe Soft Gingernsnaps

After they were done, we were ready to get the boxes filled and delivered!

This week is all about squares!!  I've finished all my home-made Christmas presents, but my hands cannot be idle for long.  I've throw myself back into knitting (and now crocheting) blanket squares for my favourite charity, KAS.  The squares need to be 8x8" and can be in any design or colour.  I like to mix it up, and since my Mother-in-law gave me a blanket square book for my birthday this year, I've quite a few to choose from.  If you are interested in knitting for charity, then click on the link below and look around. Or email me and I'll have a chat about it.  The blankets go to children in South Africa, often left orphaned by AIDS.  A truly worthwhile cause!


Then I decided I would give crocheting a try.  A while back I was given all of my Grandma's crochet hooks, and they've been languishing unused while I got my head around knitting. Now, with the help of a very useful link, I crochet my first blanket square.  Here is the site I used:
Land's End Crochet Video
Here is picture of my first square (yes, I know it is full of errors and sort of squint, but I am proud non-the-less). 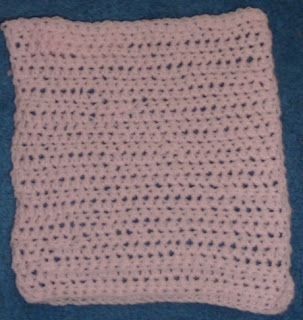 After that I used a prettier yarn and made another, which I am much more
pleased with. 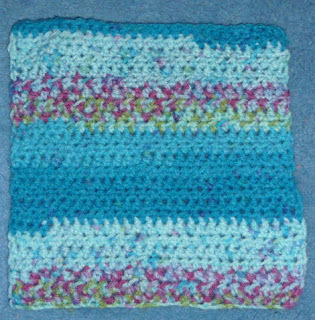 Then I crocheted a few more, because it is fast and really addictive.  I would like to try a granny square next, but I can't get my head around it.  Let me know if you have any tips!
Posted by Andria at 11:18 AM No comments:

If you like Indian food, then you should love this recipe.  I'm not even sure where the original recipe came from, I've been making it for years and years.  I think it was originally for a lamb saag, but I went ahead and made it vegetarian.  Now, I'm not vegetarian, but I do recognize that I need to eat my greens.  So, here goes:
Chickpea Saag
Ingredients


Directions
Heat the oil in a large pot over medium-high heat.  When hot, put in the pepper, cloves, bay leaves, and cardamom pods (I actually put the pods in a tea ball, so I don't have to pick them out later).  Now put in the onions, garlic and ginger.  Stir and cook until the onions are soft.  Now add the ground cumin, ground coriander, cayenne pepper, mushrooms chickpeas, and 1/2 tsp salt.  Stir and cook for about a minute.  Add the yogurt, stir to combine.  Add the spinach and remaining 1/2 tsp salt.  I use a fairly big pot and usually have to add the spinach in two batches.  I wilt the first 1/2, then add the rest and wilt that down too.  Cover tightly and simmer on low heat until ready to eat.  Remove bay leaves and cardamom pods and serve over rice. 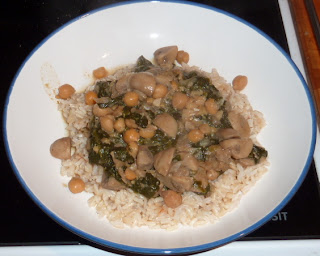 Apparently I just love hats!  This one was fast and easy and I love the flower decoration.  I'm not sure whose pattern this originally was, it isn't mine, though I wish I could take credit for it. I bought a CD on EBay of knitting patterns, and it turned out it was just a bunch of patterns someone had scanned.  Not sure of the legality of it all, but since it is already out there I'm going to share it.  This one I've named the Pixie Hat. 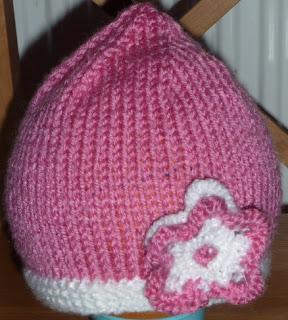 Pixie hat
I'm really not sure on the size, I'm thinking 6-9 months.  It should fit a baby with head about 15" around.

With a 4mm needle cast on 65 stitches in color A.  Work in garter stitch for 6 rows.  Cut thread

With a 5mm needle and color B knit in stockinette stitch until hat measures 11 cm, ending with a WS row.

Cut yarn and thread through remaining 9 stitches.  Pull tight and sew up back.

Flowers
Cast on 57 sts on 4mm needles and yarn A.
Row 1: purl
Break yarn and join in yarn C (a third color, or whatever you would like.  I just used the two colours I had used in the hat)
Row 2: K2 *K1 and slip this st back onto left needle, lift the next 8 sts on left needle over this stitch and off needle, (yfwd) twice, K first stitch again, K2, rep from * to end.
Row 3: K1 *P2tog, (K1, K1 tbl) into double (yfwd) of previous row, P1, rep from * to last stitch, K1
Row 4: knit
Break yarn and thread through remaining stitches.  Pull of tight and fasten off securely.  Join row end and edges.

Make another flower using yarn A throughout.  Lay this on top of other flower and attach centre of both flowers to hat as in photograph.
Posted by Andria at 5:01 AM 2 comments:

I love, I mean really LOVE Chai tea.  I found a tasty Chai tea mix at Tesco, but with the terrible weather I haven't been able to make it back there to buy more.  None of my local shops carry it, which only compounds my sadness.  Then today it occurred to me to try to make it myself.  I'll admit, sometimes I'm a little slow in that regard.  I found a recipe for the crock pot, and since things couldn't get much easier I gave it a go.  Let me just say, it is divine!  I'll post the recipe as I made it, and link to the original one.

1)  Add water and spices to the slow cooker/crockpot.  Cook for 8 hours.
2)  Add the tea bags and the sugar, steep for 5 minutes.  Remove tea bags and then strain liquid through a sieve.  Add milk.  Enjoy!  Store in the fridge, I use an old milk jug.  It is also very nice cold over ice.

Posted by Andria at 2:05 PM No comments:

I'm still plugging away, making Christmas presents for the family.  I am glad to say the end is in sight.  I wanted to post the hat I just finished for my nephew, who turned 15 a few days ago.  He loves all thing Scottish, so I went with that for the hat.  Really it was a basic hat, and was only delayed in that I didn't have enough wool and had to wait for more to be delivered. 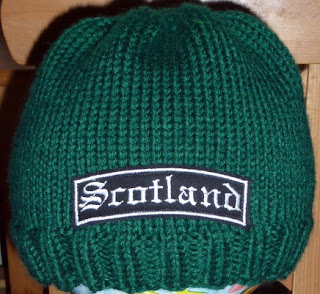 Ryan's Hat
Materials:
5mm circular needles (33cm long I believe), a set of 4, 5mm DPN's
The wool I used is Jarol Heritage DK.  It is 55% wool, 25% acrylic and 20% nylon. I used a double strand so the tension would be right, and to make it that much warmer.  Speaking of tension, I didn't do one I just started knitting and it worked out ok.  I'll do a tension square and add it later on.

Directions:
On the 5mm circular needle cast on 92. Add a row marker.

2) Knit until measures 17cm (5.5in).  Knitting in the round will produce a stockinette stitch.  If you wanted a garter stitch then K 1 row, and P the next.  I like the look of stockinette for a hat.

Repeat these two rows until there are only a few stitches left, say around 10 or 12.  At some point you are going to have to switch to a set of 5mm DPN's.  Just do it whenever is comfortable to you.

Cut wool leaving a tail, and thread through the stitches.  Draw tight, turn inside out and weave end it.  Viola!

Decoration:
For the Scotland badge I turned to my ever trusty Ebay.  I was able to get this Scotland badge for only a few pounds, and it seemed teenage boyish to me.  I sewed it onto the hat with clear thread.  I like the idea of a badge so much I think I might try others with different decals.
Posted by Andria at 4:42 AM 4 comments: